As explained in our About Page, the School of Wisdom has a history of opposing Nazis. We did so in Germany in the early 1930s and lost. The NeoNazi resurgence is personal. Hitler vilified, then closed the School of Wisdom in 1933 after he became Chancellor of Germany, later Fuhrer. Before that the School of Wisdom had been successful operating in Darmstadt, Germany since 1920 as a kind of combination Ted-Talk and meditation center. School founder Hermann Keyserling was put under house arrest and isolated for nine years, from 1933-1942. The virtual imprisonment caused a severe decline in his health and early death in 1946. The only reason Hitler did not kill Hermann is that his wife, Countess Maria Bismarck, was the granddaughter of Otto Bismark. They lost the School, their friends and their health. Herman died in 1946 before he could reopen the School.

The Nazis defeated us in 1933. We eventually came back, but it was a long, hard road. Chances are you have never heard of us. We have kept to ourselves and never returned to politics. It was not necessary to the School’s goals.

Now it is. Times have changed, but the spiral continues. The threat of Nazis demagoguery and hate has returned. We once gain rise up to oppose this grave danger. 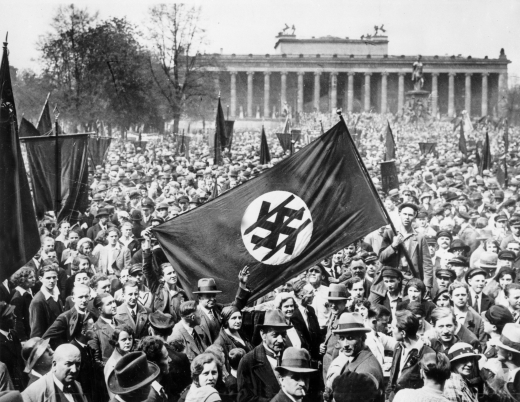 Protests in Berlin against Nazi Party

One of the basic messages of the School of Wisdom is that meaningful action should come out of personal understanding, not the orders of others. Investigate for yourself to determine if you should oppose these hate groups. And who they are. Our primary “ironic” instruction is not to follow our instructions, but rather to reach your own understanding.

If  your understanding is consonant with ours, then we can join together in action, in peaceful protests. Do not follow anyone one or any group out of blind obedience. Go as your own true self dictates. Follow your inner truth. Then we can stand on even ground as friends.

That is where our understanding has taken us. If you agree, then join with us.  Join in the protests, but take time out to meditate. Don’t let the fascists steal your inner Zen.